You have a happy family with little children in the idyllic “atomic city” of Pripyat, Ukraine. Your husband works at the nearby Chernobyl nuclear power plant. (Then and now).

You are privileged with wide flower-lined streets, the Soviet Union’s first supermarket, swimming pools, a cinema and a close knit community of 50,000 all bound by one common element: Chernobyl. It’s a sunny Saturday afternoon. You walk your baby in a stroller while your other children frolic on the playground.

Unaware that radioactive dust and debris is contaminating the air, leaves, and water around you. Unaware because the Communist Party and KGB have cut communications with the outside world. Unaware because the Soviet Union can’t allow the truth to shatter the illusion of power their rule is dependent on. You still go to the local theater for plays and performances. This was a beautiful cultural arts center built in 1959.

Two days later, a voice on the radio announces that “an unpleasant’ accident has occurred. There is no need to panic, but as a precaution, a mandatory evacuation is ordered. It will only be temporary, you are assured.

So you pack a few things and dutifully board one of the 1,000 buses in a caravan that will scatter families all across the countryside.

You leave your home. Your school. Your toys. Your food. Your life. Your city. Unaware you will never be allowed back. It is that city we entered today, past multiple military checkpoints. It is like taking a snapshot of a soviet city in 1986. It’s like time stood still here.

The pictures are from abandoned classrooms, kindergartens, an amusement park due to open five days after the accident, a cafe, and abandoned homes in the surrounding villages. You can walk right through the old towns and into actual homes being reclaimed by nature and the woods. It’s creepy.

Why did all this happen? A few miles away, human error combined with a severely flawed Soviet-era reactor design at Chernobyl triggered several explosions that blew off the heavy steel and concrete lid of the reactor. The resulting fireball spewed more radioactive material into the air than from the bombs dropped on Hiroshima and Nagasaki.

As 50,000 residents fled, the Soviet government tried to hide the disaster, with Gorbachev threatening to fire (i.e. send to Siberia) anyone who would stop the planned May Day Parade in Kiev, 35 miles south. Propaganda was more important than the health of the kids and families breathing in the toxic air.

Swedish monitoring stations reported abnormally high levels of wind-transported radioactivity and pressed for an explanation. The Soviet government finally admitted there had been an accident at Chernobyl. It is the only accident in the history of commercial nuclear power to cause fatalities from radiation.

Thirty-one people died within a few weeks of the accident from the initial steam explosion, exposure to radiation and thermal burns, and one due to cardiac arrest. (First soviet supermarket below with shipping carts, then and now). 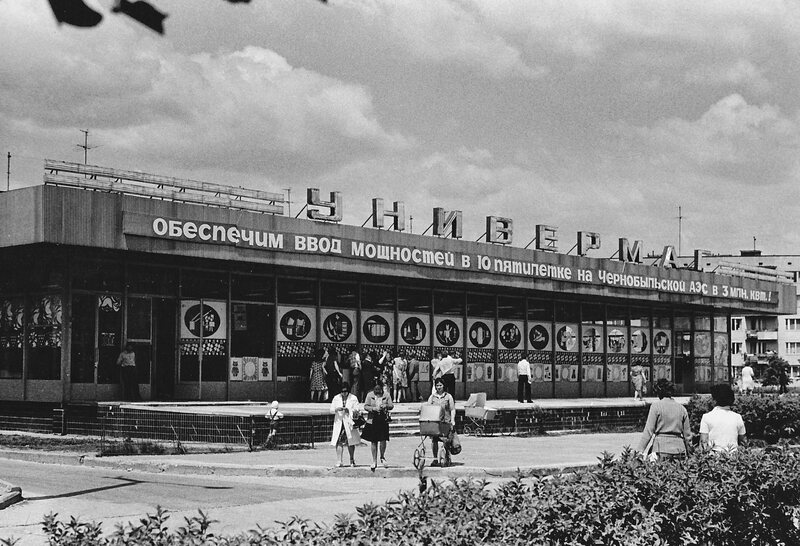 20,000 children in this town we visited as well as neighboring Belarus were stricken with thyroid cancer. Radioactive iodine released from the reactor was deposited in pastures eaten by cows, whose milk was then ingested by children. This was further exacerbated by a general iodine deficiency in the local diet causing more of the radioactive iodine to be accumulated in the thyroid.

There is debate over health effects on the clean-up workers forced to go into the toxic area. What is not contested is the high rates of suicide, alcohol abuse and apathy among those close to the plant.

Winds carried the radioactivity as far as France and Italy. Millions of acres of forest and farmland were contaminated, as were hundreds of thousands of people who remained in contaminated (but not evacuated) areas. Livestock were born deformed.

The radioactive reactor was finally enclosed in this massive  sarcophagus (think coffin). It took seven years to build and over a billion dollars.

The Soviets created a circle-shaped exclusion zone, which you can only access with special permits. We were allowed in because we paid for a tour.

Apparently, we were exposed to less radiation than we were on our flight over here. We had to wear long pants and long sleeve short to cover our skin. I think the nasty bathrooms posed a greater health threat!

There’s a reason why it’s technically illegal to enter any building in Pripyat. There are hotspots that are off the charts — so “hot” in fact that if the average person were to stand in that spot for 30 minutes, they’d be rendered infertile.

Particularly bad is the Pripyat hospital where the people with radiation sickness were treated. You are warned not to even walk by the piles of bandages in there or even get close to the famous Ferris Wheel. We did. The readings weren’t that bad. And it’s a super cool spot because this amusement park never opened.

ABOUT THE TOUR
Know when and how this idea originated? About 12 years ago, Chernobyl was featured in Casey’s Call of Duty 2 video game (which originally inspired him to visit Normandy). He’s said for years that he wanted to visit Chernobyl. I always dismissed him. “There’s no way we are going THAT far just to get radiation poisoning.” Flash forward a decade and now I’m the one asking him to go!

We had booked this tour way before the HBO Series, “Chernobyl” debuted. But what great timing. Everyone over here is talking about it. The Russians are upset, of course, and planning their own movie with the premise that the CIA caused the disaster. (Cool memorial to the first responders).

We met the tour van (20 people) a thirty second walk from our apartment at 8am. You watch two outstanding movies and documentaries on the drive two hours north. Notice all the rivers that converge here and run across Ukraine to the Black Sea—they got lucky radioactive material didn’t poison water for 250 million people!

There are multiple checkpoints coming and going to check your radiator level. If you venture off the  approved path and get too much radiation, they will confiscate your clothes! The tour guide and others have Geiger counters to constantly measure the radiation level. When we got back this evening, we immediately put our clothes in the washing machine. I think we’re okay.

Casey and I have a thing for old Soviet relics and such. They are preserved here just as life was in 1986 with the only Lenin statue left in Ukraine and the hammer and sickle everywhere.

I think the creepiest part was the kindergarten and nursery school with the cribs and cute, innocent cubbies juxtaposed against the cruelty of having so many families uprooted with no notice. Seeing the little shoes left behind just kind of gets me.

You look at these abandoned apartment buildings. And each apartment meant a family who often lost everything. 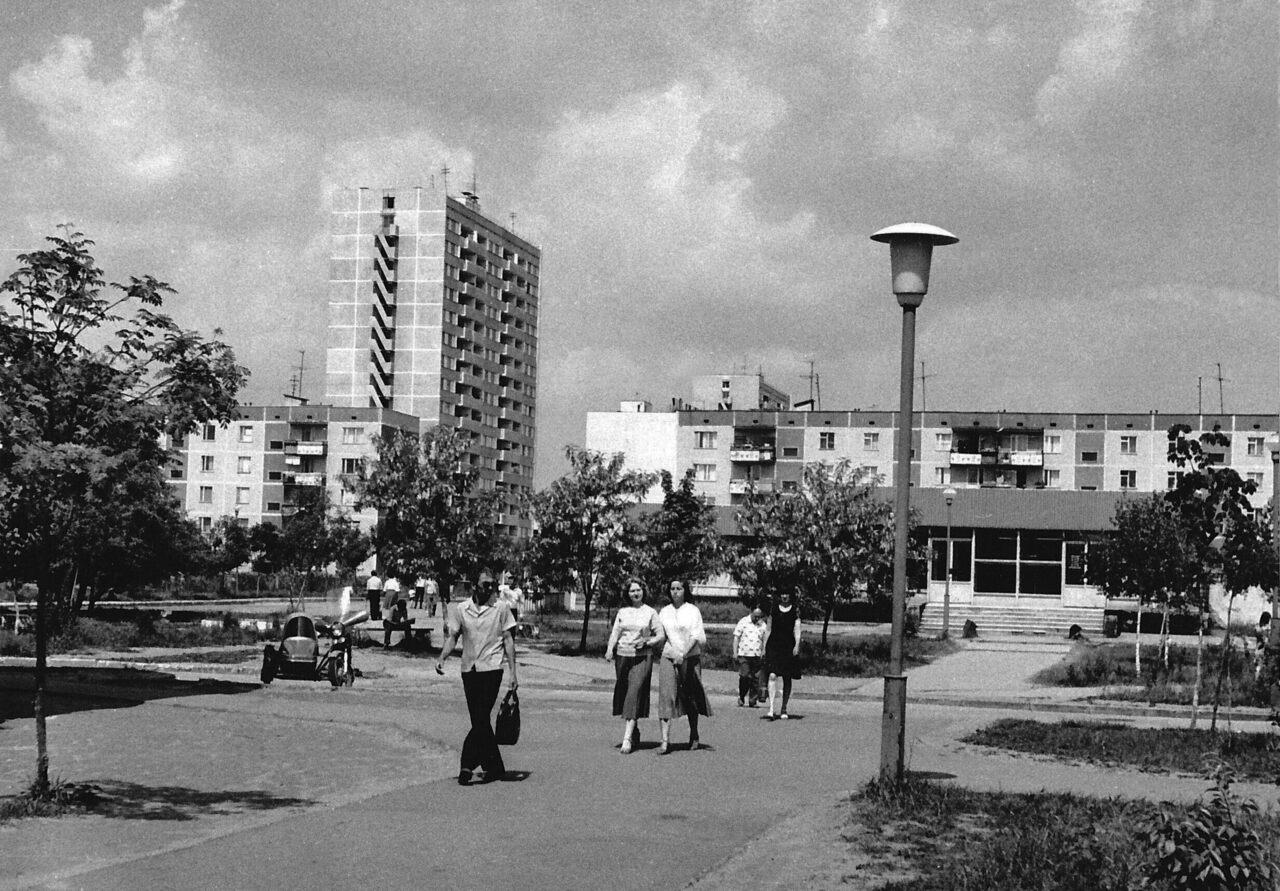 The city of Pripyat was an atomgrad—atomic city—built to house the technicians and workers at plant and their families. By April 1986, the town had a population of almost 50,000, but was small enough that it could be crossed on foot in 15 minutes.

I was surprised that we got within about 50 yards of Nuclear Reactor 4, which blew up.

The stainless steel covering is an engineering feat beyond description.  It was too dangerous to build it above the smoldering reactor so they had to construct it a few football fields away over seven years, then slide it over top of the reactor to create a perfect fit. Really mesmerizing to be that close. And radiation levels this close were actually really low because of decontamination efforts.

The amusement park was fascinating. It was supposed to be a huge celebration of the town’s achievement. And yet no one ever rode on these rides.

We drove through the red forest, so named because the initial radiation burst turned the trees red. They are still red, although everything else is green around the rest of the town.

So you’re standing there looking at a place that used to be bustling with people. And it’s still there, exactly as it was in 1986, just covered by trees and grass. Kind of eerie.

You go to a cafe with beautiful murals and these vending machines still there. In Soviet times, you’d put a quarter in the machine and drink out of the glass provided, then rinse it for the next person to use. Go communism.

Ukraine has a way to go with its service. Our tour guide just wasn’t qualified or professional. In many respects, we knew more than her! And it was telling that I was the only one on the bus who was even alive when the Chernobyl disaster happened. But it was a once in a lifetime experience far from home and timely since the HBO series CHERNOBYL has been hugely influential all over the world.